https://static01.nyt.com/files/2018/us/politics/20180413a-doj-oig-mccabe-report.pdf The Office of the Inspector General released a report today detailing the reasons for the firing of former Deputy Director Andrew McCabe. The primary reasons appear to be a "lack of candor" about information released to the Wall Street Journal about the Clinton Foundation investigation. From what I gather reading this report, it is little more than an explanation about why McCabe was fired rather than an indictment of McCabe or James Comey's reputations. McCabe claims to have allowed his Special Counsel to confirm the existence of the Clinton Foundation investigation, which Comey had previously avoided. Common practice is to avoid confirming or denying the existence of any active investigation. From the report, it argues that McCabe was not forthright and essentially was dishonest (whether intentionally or not) when he was asked about the release of information to the WSJ. This is a
Post a Comment
Read more

- April 13, 2018
Netflix and Amazon have really made these lists difficult, since a lot of the best material is now being released straight to streaming services. I should probably keep a better list of this stuff as I watch it. But I'm pretty bad about that nowadays. Call Me By Your Name Mother! Three Billboards Outside Ebbing, Missouri Get Out Dunkirk Wonder Woman Wind River Lady Bird A Ghost Story Baby Driver Movies I have not seen, want to, and may end up on this list:
Post a Comment
Read more

- October 10, 2011
On October 21, 2011, I will be going to jail. I do not yet know how long. It could be anywhere from 62.5 days (the minimum sentence) up to 10 years in prison (the maximum sentence). My lawyer has essentially prepared me for 1 year, saying he would be surprised if it was anything less. It could even be prison, which scares me quite a bit. Jail is bad enough, I don't know how I'd survive prison. Honestly, it seems a bit strange to think of myself ever going to jail. As a generally law-abiding citizen who prefers to avoid confrontation with the legal system, I have had a difficult time grappling with this. It was never my intention to hurt anyone, and it amazes me how a stupid choice could so greatly derail so many lives. Two victims were physically injured, both quite seriously. It is possible that one of them may never fully recover from his injuries, although I do not know what his condition is, even six months later. I can only hope he recovers. Whatever else happens, kno
Post a Comment
Read more

Honey Badger takes what it wants

- June 29, 2011
If there is one thing in this life that I find most difficult to cope with, it’s the loss of friends and loved ones. To death, to life, to time. Our lives change and friends become distant from each other, rarely able to retain the same closeness that causes the separation to hurt as much as it does. That break is difficult even when the friendship is left in turmoil: things said in unfortunate moments of lapsed judgment, things unsaid that might have helped mend confusion. More challenging still is when the emotional tie is unrequited, a raw nerve being plucked and left to heal without being mended. I’ve experienced unrequited love before – or I think that’s what it was. I’ve never been in love with someone who felt similarly towards me. It’s my continued regret that I have not experienced this. It is seemingly so common yet completely beyond my grasp. Can you fall in love with someone without really having spent time with them? Or is this simply a “crush”? What of “love at first si
Post a Comment
Read more

- January 05, 2011
Each year, out of a nasty habit I developed while writing bad movie reviews back in the late 90s, I try to compile a list of my favorite films of the previous year. I like ranking them, even though the ranks can usually shift on a whim depending on my mood at the time. And unlike professional film critics, I don't get to see nearly all the movies released, which makes my list typically pretty mainstream. As I see more movies from 2010, this list will probably shift around as well (although I doubt I will come back here to make those changes). In reverse order... 10. Buried 9. Easy A 8. Kick-Ass 7. The King's Speech 6. 127 Hours 5. Inception 4. How To Train Your Dragon 3. Restrepo 2. The Social Network 1. Black Swan Movies I have not seen, want to, and may end up on this list: The Ghost Writer A Prophet Green Zone Exit Through The Gift Shop Micmacs Winter's Bone I Am Love The Tillman Story Catfish Fair Game Four Lions The King's Speec
Post a Comment
Read more 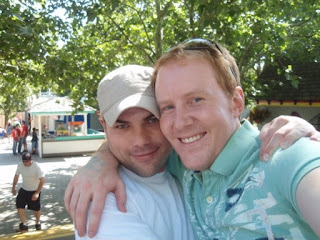 Drunken and lacking in attention span, the norm for a drunken weekend evening, I wandered through the local bar TryAngles. It was a relatively nice night in the summer of 2009 when something peculiar occurred: a note was handed to me by a guy with striking features. Searing sharp eyes, an innocent and shy smile, and impossible eyebrows. His name and number scribbled on the note, one of the only times I’ve ever received a number from a guy at the bar on a note. It felt a bit like being in high school, sparked with that twinge of excitement. Just as quickly as he had handed it to me, he disappeared into his group of friends. This is how I met Jason McCarley. One of my truly devastating problems is my lack of memory. I remember things which occur, but rarely in which order. I have a horrible sense of time, and this recollection is therefore segmented into bits and pieces instead of a linear timeline. The more I think, the more things become clearer, but since I generally suspect my m
Post a Comment
Read more

- January 22, 2010
"Because [corporations] may be managed and controlled by nonresidents, their interests may conflict in fundamental respects with the interests of eligible voters." Justice John Paul Stevens, dissenting opinion On January 21st, 2010 , the United States Supreme Court ruled, in a 5-4 split decision, to overturn decades of campaign finance reform under the guise of First Amendment requirements. Justices Roberts, Scalia, Kennedy, Thomas, and Alito voted in favor of Citizens United, the nonprofit which brought the lawsuit. Their argument? That their film, Hillary: The Movie , was unfairly prohibited from being screened, since they attempted to broadcast it within 30 days of the 2008 Presidential election. I would like to point out that I have no legal experience, but even I can see how flawed this decision is. The opinion by Justice Kennedy (the current swing vote on the court) spectacularly fails to explain their decision, delving into such random non-issues like video-on-demand s
Post a Comment
Read more
More posts